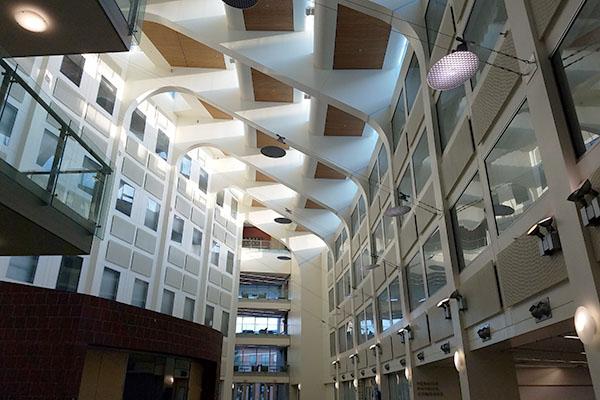 We extend the Standard Model (SM) with parity symmetry, motivated by the strong CP problem and dark matter. In our model, parity symmetry is conserved at high energy by introducing a mirror sector with the extra gauge symmetry, SU(2)R×U(1)R. The charges of SU(2)R×U(1)R are assigned to the mirror fields in the same way as in the SM, but the chiralities of the mirror fermions are opposite to respect the parity symmetry. The strong CP problem is resolved, since the mirror quarks are also charged under the SU(3)c in the SM. In the minimal setup, the mirror gauge symmetry leads to stable colored particles which would be inconsistent with the observed data, so that we introduce two scalars in order to deplete the stable colored particles. Interestingly, one of the scalars becomes stable because of the gauge symmetry and therefore can be a good dark matter candidate. We especially study the phenomenology relevant to the dark matter, i.e. thermal relic density, direct and indirect searches for the dark matter. The bounds from the LHC experiment and the Landau pole are also taken into account. As a result, we find that a limited region is viable: the mirror up quark mass is around [600\,GeV, 3\,TeV] and the relative mass difference between the dark matter and the mirror up quark or electron is about O(1-10\,\%). We also discuss the neutrino sector and show that the right-handed neutrinos in the mirror sector can increase the effective number of neutrinos or dark radiation by 0.14. This talk is based on arXiv:1812.07004 accepted by JHEP.