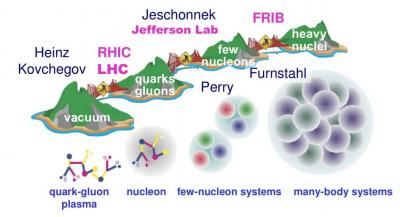 This research includes the direct study of quantum chromodynamics (QCD), the relativistic field theory of quarks and gluons, the connection of QCD to effective theories of the strong interaction at low energies and the manifestation of QCD in the highly compressed and excited nuclear matter created in relativistic heavy-ion collisions. The challenge for nuclear theorists is to develop reliable calculational tools for QCD in the strong interaction regime, to discover and exploit connections with successful nuclear phenomenology and to derive systematic descriptions of QCD in terms of low-energy degrees of freedom (hadrons). Research in the Nuclear Physics Theory group is progressing in each of these areas. 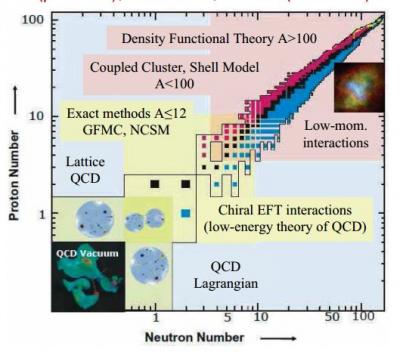 Effective field theory (EFT) and renormalization group (RG) methods have been developed by group members to quantitatively explain how low-energy nuclear phenomenology emerges from QCD. These methods enable systematic and model independent calculations with error estimates, using control over the degrees of freedom to optimize convergence. Group members are among the leaders in applying EFT and RG to nuclear few- and many-body systems.
Electron scattering is an important probe of nuclei. Insight into the crossover from quark-gluon to hadronic descriptions, which is a major goal of the Jefferson Lab experimental program, is possible only if the model dependence of the theoretical descriptions is under control. Toward this end, group members analyze and interpret JLab experiments in the GeV regime with controlled relativistic calculations, and use RG-evolved operators to analyze high-momentum-transfer processes.
At very high densities and temperatures, such as those in the early universe just after the Big Bang, QCD predicts that strongly interacting matter turns into a quark-gluon plasma (QGP).

This QGP also can be created in relativistic heavy-ion collisions, and group members are Among the leaders in developing theoretical descriptions for the creation, thermalization and collective dynamical evolution of the QGP and, in collaboration with their experimental colleagues at Ohio State, in applying these theories to experimental data. New techniques are being developed to describe extremely dense gluonic systems, known as the Color Glass Condensate, which can be tested at present and future high energy heavy-ion and electron-ion colliders. In addition, the group has been exploring the connections between strongly coupled quark-gluon systems and new calculational methods, such as AdS/CFT correspondence, emerging from string theory.
Among the nuclear theory group faculty are a Hess-Prize recipient and Distinguished University Scholar, a DOE Outstanding Junior Investigator and Sackler Prize winner, and several APS and AAAS Fellows. In addition, the group typically includes several postdoctoral research associates and three to six graduate students. The group is committed to diversity in science and welcomes members of underrepresented groups. Support for students and postdocs comes from the National Science Foundation (NSF) and the Department of Energy (DOE). Membership of nuclear theory faculty in the DOE funded UNEDF and JET Collaborations provides students and postdocs with access to international workshops and summer schools where they can broaden their physics horizon beyond the range of locally offered courses.
Advanced