Discovery of a Higgs-like Boson at the LHC Experiments

The Ohio State CMS group presently consists of faculty members: Prof. L. S. Durkin, Prof. C. Hill, Prof. B. Hughes, and Prof. B. Winer as well as several postdocs, graduate and undergraduate students and engineer Dr. B. Bylsma.  Prof. Stan Durkin is currently the head of CMS Endcap Muon detector electronics a key detector element in the Higgs search. Prof. Chris Hill is currently CMS Deputy Physics Coordinator responsible for overseeing all analyses taking place on the CMS detector. He is presently at CERN helping with analysis and publicity related to this announcement. The Ohio State joined the CMS collaboration in 1994 along with the first wave of U.S. universities.  The group played a leading role in the design and construction of Cathode Strip Chamber (CSC) electronics for the CMS Endcap Muon detector.  They initiated the architecture of the CSC electronics system, developed key front-end ASICs (Application Specific Integrated Circuits), designed and tested five different types of circuit boards and implemented all of the data acquisition firmware in the system. The scope of our contributions include 220,000 channels of cathode front-end electronics and the entire chain of data acquisition electronics that reads out digitized data from all the cathode and anode channels in the system. Ohio State designed and built over 3200 electronics boards of five different types for this project. 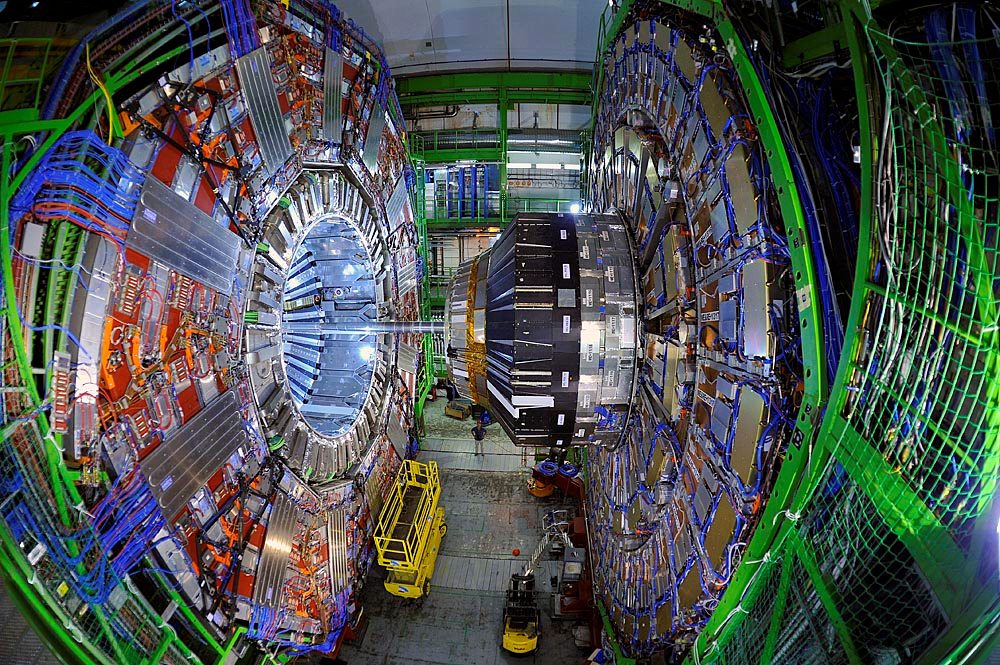 Figure 1 The opened-up CMS detector in the under ground experimental cavern at Point 5.  Cathode Strip Chamber modules (trapezoidal in shape) instrumented with front-end electronics (in aluminum shielding boxes) are clearly visible on the right side.  Ohio State built a large portion of the on-chamber electronics

Figure 2: Shown in the picture above is a Higgs particle decaying into four muons in the CMS detector. The ionization trail of three out of the four muons (red lines) were measured with Ohio State designed, manufactured, and presently maintained electronics mounted on the Cathode Strip Chambers (trapezoidal chambers in picture).

The ATLAS group consists of three faculty, Profs. Gan, Kagan, and Kass as well as several postdocs, graduate and undergraduate students and engineers. The group which joined ATLAS in 1998 has played a large role in both the data collection and analysis activities of the experiment. The OSU ATLAS led the design and construction of two of the ATLAS detector’s key systems, the readout of its pixel tracking detector and its luminosity and beam monitoring devices both of which are critical to the discovery of the Higgs Boson. For the pixel detector readout the Ohio State group designed, fabricated, and installed the communication system that allows the detector to send high speed signals over both optical fibers and traditional copper cables.  Due to its close proximity to the LHC’s beams the electronics had to be extremely radiation hard and therefore the group had to overcome this difficult problem by designing and  fabricating several custom ASICs for the project. The beam monitoring and luminosity devices which protect the inner detector and allow a 1.8% luminosity measurement use CVD diamond as the particle detector medium. CVD diamond was chosen as the detector medium due to its inherent stability and radiation hardness. The OSU group used its unique abilities with this technology to do much of the processing, testing, and calibration of the CVD diamonds that were used in the Beam Conditions Monitoring (BCM and BLM) and Luminosity Measurement (BCM).

Figure 3: Installation of the Atlas Pixel Detector showing the location of the OSU Optical Electronics (arrow).

Figure 4: A Higgs —>  2e (green) 2μ (red) candidate in the ATLAS detector showing the trajectory of the leptons from the pixel (innermost detector) to the muon chambers (blue boxes).

The discovery of this new particle at the LHC signals the beginning of a new era in particle physics. The Ohio State University groups on ATLAS and CMS are well positioned to continue to their important role in the uncovering of new physics at the LHC for many years to come.