A Scholar Engaged with His Community

A Scholar Engaged with His Community 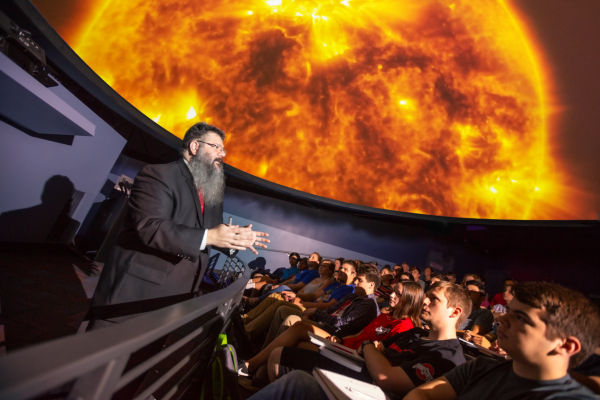 Engaged Scholars is a monthly series highlighting Ohio State faculty who have made an impact in our communities through their community-engaged research and teaching. This month Michael Stamatikos, Associate Professor at Newark is featured. Here, Michael talks about his work and involvement with his community.

My research is in high-energy particle astrophysics featuring Gamma-Ray Bursts, which are cosmological beacons of ephemeral high-energy radiation that herald the death cries of stars, ultimately resulting in one of nature's most enigmatic creations: a black hole. My long-standing strategic collaboration in fast-paced astrophysical research with the National Science Foundations IceCube Observatory and NASAs Swift/Fermi satellite missions has allowed me to participate in some major scientific discoveries, while providing undergraduate students access to vanguard research in science, technology, engineering and mathematics (STEM). This is synergistic with my additional efforts toward improving the professional development of educators, K-16 student success, science advocacy and community engagement.

In June 2018, I spearheaded the opening of the SciDome Planetarium at The Works Museum affording interdisciplinary and comprehensive programming. Serving as OSU Newark's founding director and The Works' first chief science officer, I have used astronomy as a gateway science toward a continuum of lifelong learning, which ultimately has geopolitical and socioeconomic consequences. My mantra is to "teach on all levels" and create authentic STEM experiences that fortify critical reasoning, thus resulting in an educated electorate, in accordance with Ohio State's motto "education for citizenship."

Why is it important to engage the community in your research and teaching?

STEM fields are vital to the national economy, since they provide employment that tends to be better paying, more secure, and is projected to grow at twice the rate of non-STEM jobs from 2019-2029, which exceeds the pace of our current workforce capacity. By 2025, only 40% of STEM jobs will be filled by US citizens. We are a nation whose success was built upon investing in the education of all citizens. This is the mechanism for social mobility that enables realizing the proverbial American Dream. Yet, perhaps unsurprisingly, only 19% of Americans can even name a living scientist.

In academia, STEM faculty are tasked with pushing the horizon of discovery via research, mentoring future scientists, teaching students, facilitating the professional development of (K-12) STEM in-service and pre-service educators, advocating for general scientific literacy and inspiring the next generation of explorers. Most academic institutions put a broad premium on either research or teaching/service. However, I consider these efforts, which are rarely duplicated elsewhere, to be part of our scholarly duty - especially at a large public land-grant university, so I have been deeply committed to these fundamental endeavors concurrently over the last decade at Ohio State.