NSF Establishes New Facility Within the Institute for Optical Science

NSF Establishes New Facility Within the Institute for Optical Science 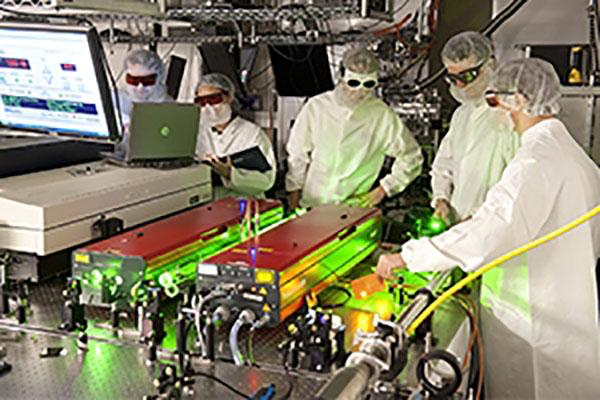 The National Science Foundation (NSF) recently awarded the Institute for Optical Science at OSU $9.5 Million to establish a National Extreme Ultrafast Science Facility (NEXUS) which will be open to scientists everywhere.

NEXUS will be located in Celeste Laboratory. Professor Robert Baker, associate professor of chemistry and biochemistry and principal investigator of the NSF NEXUS project, and IOS Director and Physics Professor Louis DiMauro will serve as co-directors of the facility, which requires some renovation to ensure a temperature- and humidity-controlled lab space with next-to-nonexistent vibration. The laser is expected to be up and running within three years.

The heart of the new National Extreme Ultrafast Science Facility (NEXUS) at Ohio State will be a one-of-a-kind ultrafast laser that delivers a kilowatt of power – roughly 200 times more powerful than a typical ultrafast laser. This will be the first such laser installed in the United States. The NEXUS laser can produce Extreme Ultraviolet (XUV) and soft x-ray light using a nonlinear process. The XUV light then allows researchers to study how electrons move in molecules and solids at unfathomably small time scales and spatial resolutions. While most XUV light sources create pulses at a repetition rate of 1,000 per second, this kilowatt laser will deliver the same pules at a rate of 100,000 per second.  “This will allow us to get the same quality of data in 1/100th of the time; experiments that take us a week can now be completed in less than an hour,” said Robert Baker.