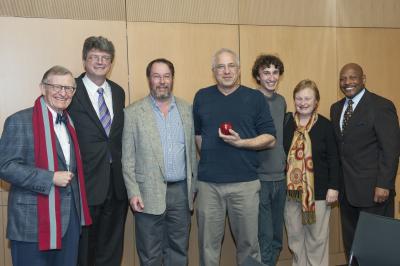 President E. Gordon Gee accompanied by Archie Griffin, Divisional Dean Peter March, Chair Jim Beatty, Doug's wife and son and others from Physics suprised Douglass Schumacher at a specially scheduled group meeting.  This surprise visit was scheduled to announce that Doug had received one of 10 annual Alumni Awards for Distinguished Teaching.  To say the least, Doug was very surprised and was happy to share the moment with his family and with the many faculty, students and staff who work with him in his research group.  The Alumni Award for Distinguished Teaching recognizes faculty for their teaching excellence.  The recipients are recognized with a $3,000 honorarium made possible by gifts from the Ohio State University Alumni Association, University Development, and the Office of Academic Affairs.  In addition, the Office of Academic Affairs awards an increase of $1,200 to each recipients base salary.  Members are also inducted into the University's Academy of Teaching. 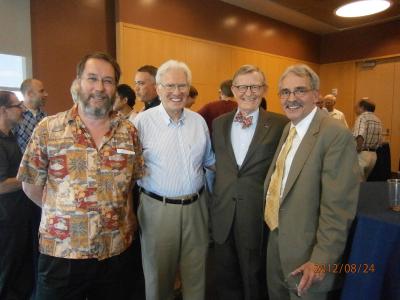 President E. Gordon Gee, Executive Dean Joe Steinmetz, Divisional Dean Peter March and many of his astronomy and physics colleagues were on hand to help Prof. Gary Steigman celebrate his retirement on August 24, 2012. The conference room (4138 PRB) was cleared of its normal tables and chairs and refitted with bistro tables with royal blue clothes and flickering tea lights.  Champagne, beer and wine as well as soft drinks were offered to the celebrants along with an assortment of hot and cold appetizers and desserts.  A lively crowd assembled including many faculty members from both departments, emertius colleagues, postdocs, students and staff.  Dr. Bob Scherrer flew in from Nashville, TN where is is chair of the Dept of Physics at Vanderbilt Univesity, as a surprise for his former colleague and gave a seminar prior to the reception as well as a bit of a roast of Prof. Steigman.  Dr. Steigman was surprised a second time when President Gordon Gee stopped by to offer his congratulations.

The January 26, 2012 Physics Department Faculty Meeting was interrupted by a surprise visit from President E. Gordon Gee, Divisional Dean Peter March, Sr. Associate Vice President for Research, Jan Weisenberger and  Barbara and Kimberly DiMauro.  The purpose of this visit was to notify Lou Di Mauro that he was the recipient of one of six 2012 Distinguished Scholar Awards.

This award, supported by the Office of Research is given to senior professors for exceptional scholarly accomplishment.  Recipients are nominated by their departments and chosen by a committee of senior faculty including former winners of the award. An honorarium of $3,000 and a research grant of $20,000 to be used over the next three years is given to each recipient.

Lou DiMauro gratefully accepts "the check in the mail envelope" from President Gee.

On February 15, 2011 in a surprise visit from President E. Gordon Gee, Divisional Dean Peter March, Sr. Associate Vice President for Research Jan Weisenberger, Chair Jim Beatty and colleagues in Physics, Junko Shigemitsu was notified that she was the recipient of the 2011 Distinguished Scholar Award.

The Distinguished Scholar Award, established in 1978, recognizes exceptional scholarly accomplishments by senior professors who have compiled a substantial body of research, as well as the work of younger faculty members who have demonstrated great scholarly potential. The award is supported by the Office of Research. Recipients are nominated by their departments and chosen by a committee of senior faculty, including several past recipients of the award. Distinguished Scholars receive a $3,000 honorarium and a research grant of $20,000 to be used over the next three years.